“Thanks for releasing me, Spyro. You have no idea how long I've been trapped in crystal... and err... Neither do I... who are you, again?”
—Altair

Altair (アルテア=マジロジーン in Japanese) is a dragon from Magic Crafters who was trapped in Blowhard in Spyro the Dragon.

In the Spyro Reignited Trilogy, Altair is dressed in a blue cloth-like gown, wears blue-tinted glasses, carries a glowing magical globe and has some sort of artifact is hanging from his right horn. 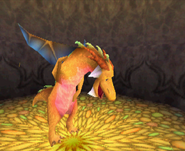 Altair in the PAL version

Retrieved from "https://spyro.fandom.com/wiki/Altair?oldid=116612"
Community content is available under CC-BY-SA unless otherwise noted.