“After you free all the dragons, pass through this fancy...vortex, eh, thingamajigger. It'll take ya' back to the Artisan Home. But first lemme tell ya' a story!”
—Astor

Astor (アスター Asutā in Japanese) is an Artisans dragon who first appeared in Spyro the Dragon.

In the Spyro Reignited Trilogy, Astor is a scholar[1] and appears a bit younger than in the original, but still old. He has a necklace and a hat, carries a shepherd's crook, appears to be a light purple, as opposed to grey like the original, and has small spikes on his body.

At the beginning of the first game in the series, Astor is interviewed by DNN. He seems to forget things too easily. As he can't remember the amount of worlds there are nor the amount of treasure there is. When asked about a certain Gnorc, Lindar appears and begins to say words that mocked and insulted Gnasty Gnorc, calling him simple, "no threat" and ugly! As a result, Astor and the other dragons (but Spyro, possibly due to his small size) were turned into crystal statues. He was later saved by Spyro and Sparx at Stone Hill.

Year of the Dragon

Astor appeared at the beginning of Spyro: Year of the Dragon. Bianca thought he was waking up when she was stealing the last of the dragon eggs from the Dragons, but he was just moving in his sleep. Astor did indeed wake up when he heard Hunter's wail of pain when Bianca stepped onto his tail. In the next scene with the Dragon Elders, Astor is shown trying to pull another dragon (apparently Lindar) out of a hole.

In a flashback sequence, over a thousand years ago, Astor was in a disagreement with the Sorceress. She cast a spell on him as a warning and banished all dragons from the Forgotten Realms.

In the Spyro Reignited Trilogy, Astor's role in the opening sequence is reduced to him walking in from the background as Bianca wakes them all, with Lindar filling in his actions. He is still the dragon being seen talking with the Sorceress. When the baby dragons were returned to the Dragon Realms, Astor takes a look at a baby dragon that Argus was holding, only to be burped in the face.

Astor in the first cutscene.

Astor is trying to negotiate with the Sorceress about staying in the Forgotten Realms.
Add a photo to this gallery 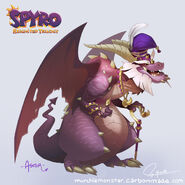 Retrieved from "https://spyro.fandom.com/wiki/Astor_(Spyro_the_Dragon)?oldid=120126"
Community content is available under CC-BY-SA unless otherwise noted.