Autumn Plains is the second homeworld in Spyro 2: Ripto's Rage! and Spyro Reignited Trilogy. As the name suggests, it is based on an Autumn Plain, with a swimming pool in the middle and gently dying brown leaves, and a beautiful dawning sky.

The Autumn Plains can be a bit misleading in its name. It is hardly made of plains, though it is stuck in a perpetual autumn environment. Instead of plains, it is settled on a high-risen plateau shaped to simply look like a plain on the side. The entire location is guarded by massive white-stone walls and gold-crested ramparts, and dominated mostly by a huge castle, abandoned just like the ones in Summer Forest and Winter Tundra. The trees hold gold, brown, and red leaves, scattering them along the grassy courtyard of the castle. An underground stream runs through the area, rising into a marble-carved pool. A few spiral-cased structures standing. While not the largest castle in Avalar, it has hidden rooms, a rooftop gallery, and a giant throne room currently being drained of Ripto’s imported lava.

An image of the castle in this world

Ripto fell to his first "death" in Autumn Plains.

Zoe & the fairies in Autumn Plains 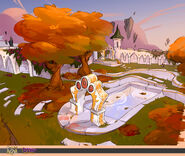 Retrieved from "https://spyro.fandom.com/wiki/Autumn_Plains?oldid=124843"
Community content is available under CC-BY-SA unless otherwise noted.