“Thank you for releasing me.”
—Azizi

Azizi (アジ=ドリノマール Azi in Japanese) is a dragon from Dream Weavers imprisoned in the realm of Dark Passage. He first appeared in Spyro the Dragon.

In the Spyro Reignited Trilogy, Azizi is portrayed as a blind dragon, holding a walking stick. Hs wing membranes are now patterned in star constellations, wears black glasses also marked with star constellations and a purple cape on his back. Azizi also has a crescent moon-shaped spade at the end of his tail. 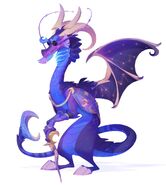 Retrieved from "https://spyro.fandom.com/wiki/Azizi?oldid=120715"
Community content is available under CC-BY-SA unless otherwise noted.