Beast Makers (ビューティフル ガーデン ホーム Beautiful Garden Home in Japanese) is the fourth homeworld in Spyro the Dragon and Spyro Reignited Trilogy remake of the first game. It is a swampy homeworld, with electrically charged platforms found in various areas activated by Gnorcs.

The dragons native to this region tend to use sheer strength to overcome their enemies. You must collect at least 5 dragon eggs to access this world.

The Beast Maker dragons’ homeworld is a gigantic swamp, with green and black ooze that easily traps any creature smaller than a Beast Maker dragon and suffocates it. Small patches of dry ground harbor wooden huts which serve as homes for the natives, and they are connected by split logs floating in the ooze in between. The horizon is shrouded in an ominous black mist, adding to the eerie feel of the realm. Torches are lit all over to provide lighting. In the middle of the realm is a huge Aztec-like temple with numerous steps. It is used for meetings among the inhabitants.

The Beast Maker dragons are responsible for bringing forth all-new species of creatures living in the world. They choose to live in swamps, in tumble-down wood platforms, on stilts in the mudflats and hollowed-out trees in the thick forests. Here they can find natural claw, roots and other materials to do their work.[1]

The portals in this homeworld are giant, carved wooden and stone arches and sometimes with tribal patterns. 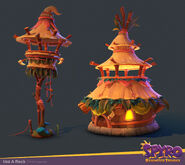 Retrieved from "https://spyro.fandom.com/wiki/Beast_Makers?oldid=121268"
Community content is available under CC-BY-SA unless otherwise noted.