Blowhard (ハリケーン・ハット, Hurricane Hat in Japanese) was the boss of the Magic Crafters Homeworld, who resided in the realm named after him.

Blowhard was created by Gnasty Gnorc to defeat Spyro, as an advanced version of the Tornado Wizards who were seen in High Caves, and was put in charge of the Weather Wizards who were seen frequently throughout his domain (the homeworld and its realms). Spyro confronted Blowhard, and defeated the creation.

Blowhard appeared as a green torso, complete with arms and a purple head. He wore a witch's hat and had a long orange beard. His lower body consisted of a whirlwind.

Blowhard was a wind sorcerer who attacked with lightning. He circled around the arena while staying out of reach. He was capable of generating thunderclouds to defend himself. Periodically, he dropped to ground level, which gave Spyro a chance to attack. Once attacked with flame, he grabbed his hat and flew away, and Spyro must chase after him across the realm. After being flamed three times, Blowhard would be defeated, and yielded several Gems. During the last hit, his supporting whirlwind would flatten out on the ground and he would fall to the ground and be knocked out. 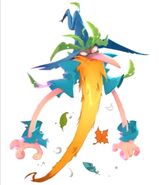 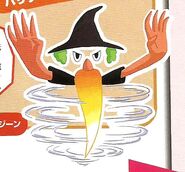 Retrieved from "https://spyro.fandom.com/wiki/Blowhard_(Boss)?oldid=124185"
Community content is available under CC-BY-SA unless otherwise noted.