“This portal leads to a special place where you can learn to fly. I remember when I was a young dragon, earning my wings-”
—Boldar

Boldar (ボルダー=マジロジーン in Japanese) is an old dragon from and imprisoned in the Magic Crafters Homeworld. As he began to recall his days as a young dragon, Spyro quickly interrupted Boldar to resume his quest.

In the Spyro Reignited Trilogy, Boldar appears a slight bit younger, and is a light yellow color. He wears a purple cloth around his waist with a brown sack attached, and a purple hat that reaches down to his chest, and bronze bracelets. He carries a walking stick with a potion bottle on top and a cauldron is in front of him. His horns twirl around a red floating crystal. 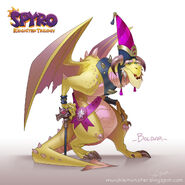 Retrieved from "https://spyro.fandom.com/wiki/Boldar?oldid=116122"
Community content is available under CC-BY-SA unless otherwise noted.