Bombo who calls himself the "Flagkeeper", also known as Bob the Flagkeeper in the Spyro Reignited Trilogy, is a genie who appeared in Scorch, a realm in Autumn Plains that only appeared in Spyro 2: Ripto's Rage! and the remaster. He wears a white turban and rides on a magic carpet. Bombo/Bob is also capable of creating and throwing magic bombs. Handel gives Spyro the task of retrieving flags from the genie, giving Spyro an orb as a reward. He does not appear in the level until Spyro has defeated 20 enemies and has talked to Handel. After Spyro does so, he will have to use superflame to shoot Bombo/Bob off of each flagpole. He then challenges Spyro to avoid his bombs while trying to get the flag from him. He does this for a total of three rounds, and after Handel gives Spyro the orb, he will not be seen again. 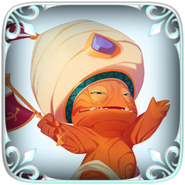 Retrieved from "https://spyro.fandom.com/wiki/Bombo?oldid=116056"
Community content is available under CC-BY-SA unless otherwise noted.