The Bunny Monster was a small bunny who lived in Midday Gardens.

At some point Bianca came to the homeworld to study her magic spells. As she sat there, this bunny came towards her to see what she was doing, at which point she accidentally turned the small bunny into a huge monster who angrily proceeded to eat her alive. Having witnessed this, Hunter the Cheetah had developed a crush on Bianca and decided to help her, jumping at the monster to fight it. At a stalemate between the two of them, the monster charged at Hunter, who kicked it in the stomach, making it throw up Bianca. Bianca picked up her spellbook and turned the monster back into a small bunny, harmlessly jumping up and down on Hunter's head before the cheetah smacked it away.

In the Spyro Reignited Trilogy, this bunny was actually a small fly-trap plant to begin with that got turned into an apple and then a bunny, as opposed to it being in addition to said plant in the original. The bunny appears white instead of blue-ish.

In the same game, instead of Hunter bashing it away afterwards, he grabs it and throws the creature away. 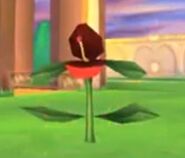 A plant standing next to the bunny. 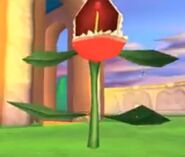 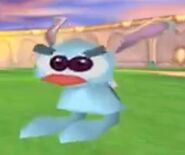 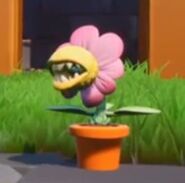 The bunny's original form in Reignited

The bunny's second form in Reignited 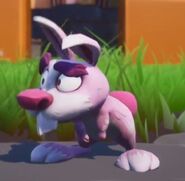 Retrieved from "https://spyro.fandom.com/wiki/Bunny_Monster?oldid=109285"
Community content is available under CC-BY-SA unless otherwise noted.