Cedric (セド=マジフーチョ Ced in Japanese) is a Magic Crafters dragon who is found in High Caves.

In the original he's deep voiced and excited. In Spyro Reignited Trilogy, he is now calmer and more quiet. He appears to be a teacher, with small purple tinted glasses, wears a purple scarf, has a belt with potion bottles, and is reading from a book. 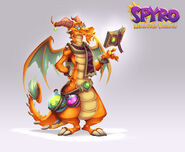 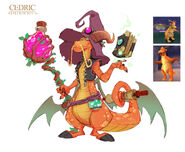 Retrieved from "https://spyro.fandom.com/wiki/Cedric?oldid=115856"
Community content is available under CC-BY-SA unless otherwise noted.