Cheetahs are a race of felines who reside in a village within the Valley of Avalar. They made their debut in The Legend of Spyro: Dawn of the Dragon.

The Cheetahs are a peaceful people that live a quiet life in the wilds of the Realms. They show little interest in the affairs of the larger world and have a fearful distrust of Dragonkind due to the misfortunes caused by Malefor and the corrupted Cynder. Not all cheetahs share the mindset as their village leader, Prowlus, who has a deep distrust towards dragons. They were soon forced into action when Malefor's army threatened their way of life.[1] One cheetah named Hunter attempted to help the Dragons in the war against Malefor before his village got involved. After their encounter with Spyro and Cynder, the cheetahs joined the Dragon race in their fight against Malefor's forces. 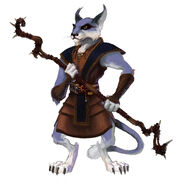 A blue cheetah from Dawn of the Dragon 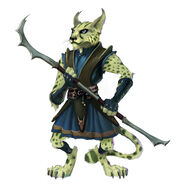 A yellow cheetah from Dawn of the Dragon

Retrieved from "https://spyro.fandom.com/wiki/Cheetahs_(The_Legend_of_Spyro)?oldid=123903"
Community content is available under CC-BY-SA unless otherwise noted.