Legendary Chop Chop is an exclusive counterpart of Chop Chop. He, along with Legendary Spyro, Legendary Bash and Legendary Trigger Happy, are only available at Toys R' Us.

For centuries, Skylanders have competed in gladiator-style events inside epic arenas of sport, where only the greatest of combatants become immortalized as magical, golden statues that stand watch as guardians. These are the Legendary Skylanders. Whenever the world is in peril, special Portal Masters can bring these statues to life and summon the Legendary Skylanders to defend Skylands against any evil that threatens it.

Like his normal counterpart, Legendary Chop Chop uses his sword to slice and dice his enemies. He can also summon giant spear like bones to erupt from the earth to skewer his enemies, and uses his shield of indestructible metal to deflect attacks.

Legendary Chop Chop is a close range fighter, getting up close to enemies to attack with his sword, and hit out with his shield while using it to protect himself. His defense is extremly high due to both his maxed defense stat and his shield which can be put to good use getting close to enemies. His upgrade paths either allow him to upgrade his sword attacks to improve his attacking capabilities, or his shield for better defense. 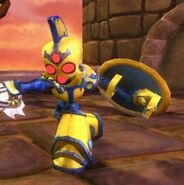