“Thank you for releasing me.”
—Conan

Conan (コルドル=ボトヨワーム Korudoru in Japanese) is a Peace Keepers dragon who is found in Dry Canyon. He has an orange complexion and red horns.

In the Spyro Reignited Trilogy, Conan is yellow and has the appearance of a Spanish knight, wielding a lance and a shield. He wears boots, a barber's basin for a helmet, a collarpiece with frills under it, dons a moustache, and sounds more confident. 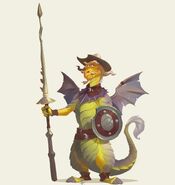 Retrieved from "https://spyro.fandom.com/wiki/Conan_(Spyro_the_Dragon)?oldid=123138"
Community content is available under CC-BY-SA unless otherwise noted.