Crystal Statues are one of the main collectibles in Spyro the Dragon.

Gnasty Gnorc turned all of the dragons, excluding Spyro, into crystal after they called him 'ugly' and other derogatory terms during an interview with DNN. Spyro then sets out to rescue all of the dragons as well as recover the stolen treasure. The crystal statues can be seen rocking slightly as the dragon trapped inside struggles to free himself.

In order to free the crystallized dragon, Spyro must step onto the statue's pedestal. A bright flash will erupt from it, allowing the imprisoned dragon to break free of his entrapment.

A beta version of a Crystal Dragon Statue

Another early version of a Crystal Dragon Statue 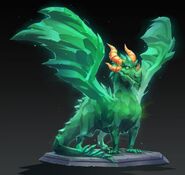 Retrieved from "https://spyro.fandom.com/wiki/Crystal_Statues?oldid=118138"
Community content is available under CC-BY-SA unless otherwise noted.