The Dam is a barrier in The Legend of Spyro: Dawn of the Dragon that contains the sea water to prevent floods from rushing into the valley. A dragon-shaped head is built on the Dam as well as a pair of wing-like structures and paws.

Concept art of the Dam 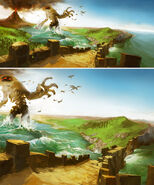 Concept art of the Destroyer and the Dam by Veronique Meignaud

The Dam as seen in the pre-level cutscene

The Dam and the floodgates getting destroyed by the overflow of seawater
Add a photo to this gallery
Retrieved from "https://spyro.fandom.com/wiki/Dam?oldid=119071"
Community content is available under CC-BY-SA unless otherwise noted.