“Big enemies like this Guh-norc with a club cannot be charged, but a quick flame, that should defeat them.”
—Darius

Darius (ダリアス=グリフーチョ in Japanese) is an Artisans dragon who resides in Dark Hollow. He instructs Spyro on how to take down large enemies; not by charging, but by flaming. He is notable for being one of few to pronounce the "G" in "Gnorc".

In the Spyro Reignited Trilogy, Darius is an actor, holding a rose, pen and writing board in his right hand and a dragon-skull with a lit candle on the forehead in his left. He also wears a blue scarf. 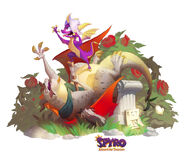 Retrieved from "https://spyro.fandom.com/wiki/Darius?oldid=116841"
Community content is available under CC-BY-SA unless otherwise noted.