Dark Hollow (ナイト スクエア 1-2 Night Square 1-2 in Japanese) is a realm which can be accessed via a portal in the Artisans Homeworld.

Dark Hollow is a mysterious and dreamy realm, set late at night under a starry, deep-colored sky with clouds on the horizon illuminated softly by a rising moon. It has some stone structures similar in appearance to Stone Hill. The realm is characterized by hopping, croaking frogs, grassy stone platforms, steps, and lanterns emitting a warm glow.

There is a checkered-floor tunnel hidden underground, which is patrolled by Gnorc Sentries. It leads to a round, stone room with platforms and a pool of murky, indigo water illuminated from beneath. The key to the Locked Chest from the central platform is in this room.

In the Reignited Trilogy, Dark Hollow is heavily populated with books and candlelight. The Dragons found here appear to be scribes, librarians, and actors, indicating a literary division of the artisan dragons.

A Shielded Gnorc from this level. 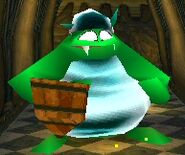 A Gnorc Sentry from this level. 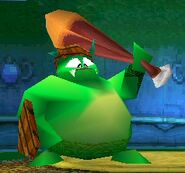 A Warrior from this level.

The dragon Alban, which is probably the first dragon that you free in this level.

Dark Hollow during a rare day-time.
Add a photo to this gallery 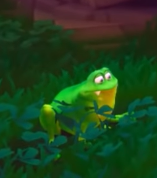 Retrieved from "https://spyro.fandom.com/wiki/Dark_Hollow?oldid=116052"
Community content is available under CC-BY-SA unless otherwise noted.