Double Trouble was an adept spellcaster. On an expedition to find exotic ingredients for his potions, he traveled in search of a rare lily that was said to multiply the power of any spell. So thrilled was he when he found it, Double Trouble instantly ate the plant and performed a spell. Suddenly, there was a loud pop… then another… and another – until Double Trouble was surrounded by exact copies of himself. As it turned out, he had misunderstood the details about exactly what would multiply. But it didn’t matter, for he quickly realized the clones were delightful companions... never mind that they were only half his size and would explode on contact.

Royal Double Trouble has the ability to cast spells from his staff and summon magic to rain down from the sky. He can also summon mindless doubles of himself that seek out enemies and explode. 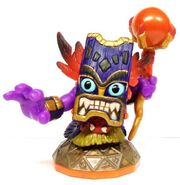 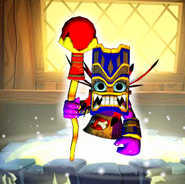 In Skylanders Universe
Add a photo to this gallery

Retrieved from "https://spyro.fandom.com/wiki/Double_Trouble/Royal_Double_Trouble?oldid=83867"
Community content is available under CC-BY-SA unless otherwise noted.