The Dragon King, Ramses, has his throne high atop a giant rock spike, known as Dragon's Peak. This is a special place for dragons, because whichever one of them controls its very top becomes the new king. Some fear that Vathek, an undead dragon and the king's evil brother, may one day try to steal the throne.

The dragon knight, Flavius, sought the Skylanders to help him free his King from the clutches of the Undead dragon, Vathek, and usurp him from the throne. After arriving in Dragon's Peak, Flavius explained to the Skylander the events that led to Vathek's rule over the Peak. Previously, the red dragon knight convinced King Ramses to go flying with him, but while they were away, Ramses' evil brother, Vathek, sat on the Dragon's Throne, making him ruler of Dragon's Peak by Dragon Law. Using the power of the Throne, Vathek cursed Ramses, turning him into stone, and Flavius blamed himself for what happened.

After the Skylander freed Ramses from Vathek's curse, the elder dragon tasked them of defeating his evil brother and informs them of how to reach Vathek, having grown too weak to fly due to the curse. Upon arriving at the Elder Dragon Throne, Vathek selfishly told the Skylanders that the Dragon Throne was his, and summoned the minions that are loyal to the Throne to attack the Skylander for their 'treachery'. As the Skylander defeated the minions, Vathek retreated to the Dragon's Throne to use its power to summon more minions to destroy them, suspecting that the Skylander can't keep fighting forever. As the evil dragon summoned all of the minions the Throne can muster, the Skylander emerged victorious despite the mass amount of enemies. Enraged, Vathek leaped off of the Dragon Throne to deal with the Skylander himself, but as it would seem a fight was about to begin, Flavius appeared and took the Throne, making him king by Dragon law and rendering Vathek completely powerless. As Vathek exclaimed in disbelief that he fell for the oldest trick in the book, Flavius used the Throne's power to turn Vathek into stone as punishment for betraying Ramses.

After the battle, Ramses returned to his position as King and pondered about what to do with Vathek, at first suggesting banishment, but dismissed the idea when Flavius mentioned that the frozen Vathek makes a ' good statue'. The Dragon King then became curious as to why Flavius didn't keep the Dragon's Throne for himself when the dragon knight had the chance. Flavius replied that Ramses himself is the only true king of Dragon's Peak and that the Throne was his until the day he decides to resign. Moved by Flavius's loyalty, Ramses then mentioned that when that day comes, he knows exactly who will take his place. The elder dragon then expressed his gratitude to the Skylander for their help, and has Flavius take them back to the Ruins.

The Dragons used to vote for their leaders but their political system became so complex, no one could understand it. Even the act of voting became difficult for most Dragons. And those who wanted to rule had to campaign and make speeches, and nobody in particular liked it so they finally just said, forget it. Whoever sits on the throne is King. Luckily, for them, the first to do so was Ramses. Not only was he the quickest to sit down but he happened to also be the most qualified to lead.[1]

Air Skylanders are stronger in this zone.

Earth Skylanders are stronger in this zone.

Fire Skylanders are stronger in this zone.

Skylanders of the Magic element are stronger in this zone.

This area is similar to the entire level in the console versions of Dragon's Peak. As you near the end, you confront Vathek.

When used in the Ruins, the peak grants acces to the Dragon's Peak chapter.

When used during a chapter, it will rain down fireballs and then deal with 999 damage to all enemies on screen with one use per chapter.

Attacks enemies with his fire breath for a short amount of time.

Gives you a speed boost for a short amount of time.

When used in the Sanctuary, the gate that leads to the Dragon Peak is opened.

Sparx attacks enemies for a short amount of time.

Gives you a speed boost for a short amount of time.

Dragon's Peak Out of Box set 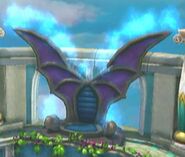 The Elder Dragon Throne as seen in the intro of Skylanders: Spyro's Adventure (with the exception of the Dragon's Throne)

Retrieved from "https://spyro.fandom.com/wiki/Dragon%27s_Peak?oldid=125439"
Community content is available under CC-BY-SA unless otherwise noted.