The Dragon Dojo is a section in the Dragon Temple where training new Dragon Guardians takes place.

The Dragon Dojo was an area within the Dragon Temple where young dragons were taught how to harness their various elemental breaths and other abilities. The Dojo make use of animated Ape Dummies to help training, types include those based on Ape Soldiers and Ape Leaders. A statue of Malefor was planted in the center of the Dojo, which can be inserted in a hatch below to allow the young dragons more room to train.

Every time Spyro recovered a Guardian, they taught him how to use their trademark element. Training begins when the giant statue of Malefor descended into the floor, making some space for dragons like Spyro to train and hone abilities, while the chosen dragon introduced the subject of their element. He encountered various Ape Dummies to train with, and Sparx and a dragon guardian are there to cheer him on while he mastered his elements. After mastering the element, Spyro must perform a fury demonstraion before fully completing the assignments.

The Dragon Dojo was explored by Spyro during the night when he heard from Sparx that Cynder ran away. It was also used as one of the Dragon Challenges. 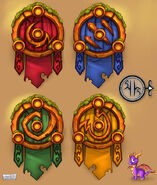 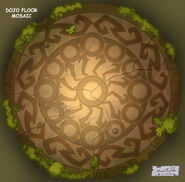 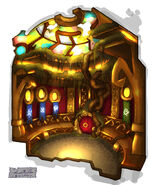 The Dragon Dojo without the dragon statue
Add a photo to this gallery
Retrieved from "https://spyro.fandom.com/wiki/Dragon_Dojo_(The_Legend_of_Spyro)?oldid=120973"
Community content is available under CC-BY-SA unless otherwise noted.