Dragons are a race of magical creatures that inhabit the Dragon Realms. They appear throughout the original Spyro games, of which Spyro himself is a part of. These creatures play a major role throughout the series, usually by being threatened by villains, who Spyro must defeat.

The dragons are primarily based on the typical depiction from western folklore as large horned and winged reptiles. They come in a variety of colors, shapes and sizes throughout the numerous games in the original series. Across these games, dragons take on a variety of designs. In the original first game, most of the adult dragons are bipedal while few are quadruple. In Spyro: A Hero's Tail and its sequel Shadow Legacy, adult dragons have animalistic ears; this feature was later given to some of the dragons in the first game recreation in the Spyro Reignited Trilogy. Young dragons such as Spyro, Flame and Ember are depicted as quadrupeds.

In Shadow Legacy, the statue of the Great Sea Dragon in Dragon Shores depicts her as as a serpent, a trait not shared by any other Dragon in the original series. The twin faux-dragons created by the Sorceress in Fireworks Factory resemble oriental depictions of dragons with long whiskers on their snouts, but their bodies are separated by multiple joints including their heads.

In the original Spyro the Dragon trilogy, all known adult dragons in the Dragon Realms are male. However in Spyro: Year of the Dragon, several of the dragon hatchlings are female. Adult female dragons first appeared in A Hero's Tail and Shadow Legacy, as well as Ember, a female dragon close to Spyro's age. A Dragon Elder named Cho Lei is also female.

In Shadow Legacy, the wizards of the Mountain of Magic had created the tiny, colorful Minidragons in honor of the Dragons, but the creatures were secretly a weapon against the fairies of Tree Tops.

As in most western mythology, Dragons are capable of flying and breathing fire (although in Shadow Legacy, Elder Tomas claims to have lost his fire breathing abilities due to old age). Dragons are also highly magical, so much that their absence causes the Forgotten Worlds to slowly lose its own magic. In Shadow Legacy, the Mountain of Magic wizards worship the Dragons due to their superior magical abilities.

Unlike in The Legend of Spyro and Skylanders series, Spyro seems to need outside aid to use other elemental breaths, such as magic from fairies or Bianca. In Shadow Legacy, Elder Astor is capable of training Spyro on using ice breath.

In Spyro: Enter the Dragonfly, Dragons are shown to give dragonflies to their hatchlings, with the magic of dragonflies protecting them. However, Spyro and Sparx are the only pair of dragon-and-dragonfly ever shown together. In Spyro 2: Season of Flame, Dragons are said to gain their fire breath from the magic of fireflies, and without it, they naturally breathe ice. This fact however, is not reflected in other games.

In the original Spyro trilogy, the Dragons are divided into five families, each inhabiting a different homeworld: Artisans, Peace Keepers, Magic Crafters, Beast Makers, and Dream Weavers. The Artisans focus on creating art, the Peace Keepers act as the military, the Magic Crafters focus on sorcery, the Beast Makers create new species of animals, and the Dream Weavers regulate the dreams of dragons.

Every twelve years, the Dragons celebrate the Year of the Dragon. During this festival, fairies deliver new dragon eggs to the Dragon Realms. These eggs will only hatch during this time. After birth, according to Spyro: Enter the Dragonfly, the baby dragons are given baby dragonflies, who both protect them and act as their companions.

In the A Hero's Tail and Shadow Legacy storyline, the Dragon Realms are governed by a group of Dragon Elders. These Elders live in the Dragon Dojo and use Shadowstones to cast powerful magic.

A thousand years prior to the series, the Dragons lived and ruled over the Forgotten Worlds. Their magic was ingrained in the land, allowing the realms to flourish. However, the Sorceress banished the Dragons after having an argument with a Dragon Elder, causing all the magic in the Forgotten Worlds to gradually fade. The Dragons, being a peaceful race, chose not to bother with the Sorceress again and remained on the other side of the world where they would call home, eventually forgetting about the aptly Forgotten Worlds. The Dragons would later come into conflict with Gnasty Gnorc, who they banished from the Dragon Worlds to the Dragon Junkyards for disorder.

According to a book in the retconned storyline of Shadow Legacy, the new Dragon Realms were founded by the Great Sea Dragon. Carrying her babies on her back, she swam across the ocean from the Forgotten Worlds and washed up on Dragon Shores, where she passed away from exhaustion. A statue was later erected in her honor.

Another book in Shadow Legacy details how following their arrival in the Dragon Realms, an ancient group of dragons built the Dragon Village using magic and advanced stonemasonry. The wisest dragons then formed the Dragon Elders, governing the other dragons from secluded hills.

The Legend of Spyro trilogy focuses on the Dragon race, as well as showing their history and struggles during the war against the Dark Master.

Dragons serve as one of the many inhabitants of Skylands in the Skylanders series. Several of them are even Skylanders, the heroes of Skylands.

Concept art of the Baby Dragons for the Spyro Reignited Trilogy 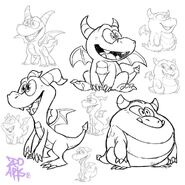 Retrieved from "https://spyro.fandom.com/wiki/Dragons?oldid=125200"
Community content is available under CC-BY-SA unless otherwise noted.