Dreadwings, also spelled Dread Wings, are enormous bat-like beasts that serve as enemies in two of The Legend of Spyro games, The Legend of Spyro: A New Beginning and The Eternal Night. These creatures, along with the Apes, follow under the orders of Cynder and Malefor. They also serve the Apes as flying mounts, as well as troop transports. Dreadwings sometimes carry containers, which holds a group of Apes, and drops them from the sky to release more ground soldiers to the area they are attacking in.

According to Jared Pullen, art lead of the game project, the Dreadwings were a blast to draw and theme for every environment type. The development team had strong elemental themes that served to influence every design, right down to materials, so drawing became an almost unconscious thing for Jared. When Jared first designed this winged enemy, he called it the 'Dreadwing' as a working name, but the name just stuck right through to the printing of this title's hand manual.[1]

Dreadwings attack by swiping, biting, and by screaming, sending loud soundwaves toward Spyro that cause him to roll backwards. Only the Assassin's Dreadwing is seen shooting dark fireballs in The Eternal Night.

There are five different species and/or breeds of Dreadwings. They can be told by their different color types.

There is a particular Dreadwing that is ridden by the Assassin. It is the only one of its kind to play a notable character.

Top View of a Dreadwing 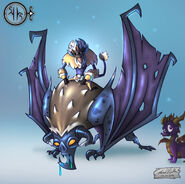 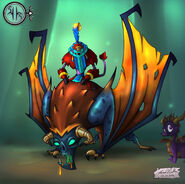 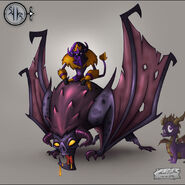 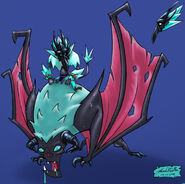 Concurrent Skies Dreadwing and rider
Add a photo to this gallery

Retrieved from "https://spyro.fandom.com/wiki/Dreadwings?oldid=118571"
Community content is available under CC-BY-SA unless otherwise noted.