“The power of earth and nature is a mighty one, for as the earth moves, so does everything with it. Be mindful as you wield it.”
—The Chronicler

Earth is a Dragon Breath from The Legend of Spyro trilogy. Terrador is the master of Earth, and one of the four Guardians. Spyro's Earth powers varies in each of The Legend of Spyro games. Many of the attacks are quite devastating, and can easily send enemies running in every direction. The few that are less devastating can at least scare your foes.

Dragons of the Earth Element embrace a strong connection to nature, covering their bodies with its power, persisting at all times, but is at its peak when the Dragon is firmly grounded. They specialize in ground fighting over aerial attack, calling forth the essence of stone and living nature. The power is expressed as an energy-based protection but literal stone and earth can be shaped and brought to beat in the service of a determined mind. Earth is a form founded on the precepts of strength over adversity, willful resolve and obstinate determination. The bedrock of the world teems with energy, alive with ancient magics and fields of mana; a trained Earth Dragon at the height of its abilities can draw strength from these, delving deep into vast reserves to express its power.

It wouldn't be unheard of for a Dragon alligned with this ability to perhaps augment their natural defenses with elementally extracted stone, fusing armoured plates and blunt protrusions to form a highly resistant armour.[1]

Spyro obtains this element in Munitions Forge when a large bell-shaped object fell on him. The trauma of being trapped under the bell awakened his Earth elemental abilities, which the young dragon immediately used to free himself. Spyro's main attack that he used to escape was titled Earth Shot. which turns earthly energies into a green, cone-shaped burst that is useful against large crowds of enemies. His secondary attack he used in manipulation of his standard attack was "Earth Bomb", where a small leafy orb is spit out towards his foes and would induce a large green tornado as its 'explosion'.

The tornado has enough strength to suck up enemies and travel along with them until they can fall hard to the ground making a pancake shape, but the move's duration is limited. When engaging and channeling tremendous energies from the fury gems, the Earth Fury can be triggered. In its first form, the fury drops many massive boulders from the sky to inflict high damage to foes. In its second form, boulders fall but six tornadoes swirl around Spyro to immobilize and attack enemies from an appropriate vicinity.

Spyro's Earth element was reawakened via his Earth dream, which it evolved within him to produce new results for his survival, like other elements. Spyro's Earth Shot was replaced with a stronger Earth Flail, where he spits out a green chain that holds a sphere and has the trait to extend and glow in three different ways. If Spyro stays on the ground with it, he can halt enemies from coming near him, or within airborne, he can swirl longer and faster which is most likely recomended. In the attack that manipulates the sphere and earthy forces, Spyro can utilize his Earth Pound attack.

When using this attack, he backflips in the air then can body slam to the ground, inducing the sphere outwards while making earthquakes go out as well. This attack is more useful via Spyro's Time ability. You can also combine these two attacks by performing the Earth Pound move and just before he finishes press which ever button (varies from platform to platform) triggers the Earth Flail, causing Spyro to do two swift turns while using the Earth Flail. When utilizing the power of fury gems, Spyro unleashes his earth fury where he levitates (like other furies) and is swallowed by a central, vertical green line. He induces about several Earth Pound-based attacks adding towards a hard, unexcapable attack that most enemies cannot survive from. When he finishes the attack, dozens of green-energy leaves swirl and blow until all energy subsides, having Spyro fall to the ground when done.

Due to his abilities being dormant and reawakened like before, Spyro's abilities become more powerful and gain new types of attacks. This time, Spyro lost his Earth Fury along with others, but in exchange for becoming slightly weaker, he has Earth Boulder where he can roll along the ground in a hard, tough cage.

He can charge it up and alter its appearance but retain its physical strength. If you charge up the attack, Spyro will hurl after an enemy or if he wants more useful results, come up and cling to a ledge with Cynder to reach up higher than with other abilities. After Spyro jumps in his earth boulder and hits the ground, an earthquake pulse throws all enemies into the air. This attack is called Armored Boulder. By manipulating his inner earth, Spyro can spit out his Earth Missile which is a rock-like projectile capable of damage in par with Ice Spikes. You can charge up its attack damage and have a small green orb formed on his mouth, signalling the attack charge is finished. When the missile is released, it will split into four miniature earth missiles each capable of high damage, if you look for many ways to use this attack against enemies. 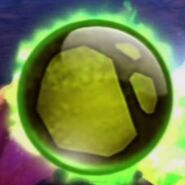 The symbol of Earth in Dawn of the Dragon console versions 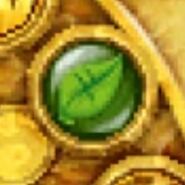 The Earth Dawn of the Dragon symbol in the Nintendo DS version.
Add a photo to this gallery

Retrieved from "https://spyro.fandom.com/wiki/Earth_(The_Legend_of_Spyro)?oldid=125002"
Community content is available under CC-BY-SA unless otherwise noted.