“Watch out Spyro, the gnorcs in these bogs have discovered the power of electricity, and it really stings.”
—Claude

Electro Gnorcs[1] are enemies found in Beast Makers homeworld and Terrace Village realm of Spyro the Dragon. They don't attack Spyro, instead, they use their shocksticks to electrocute an metallic plane around them. Spyro must defeat them before they get chance to electrocute the plane while he's in it. They can be defeated by either being charged or flamed. 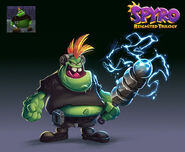 Retrieved from "https://spyro.fandom.com/wiki/Electro_Gnorcs?oldid=115103"
Community content is available under CC-BY-SA unless otherwise noted.