The Electrolls are the residents of Hurricos, located in the Summer Forest that only appeared in Spyro 2: Ripto's Rage!. They are blue coloured and wear glasses. They were being tormented by the Gear Grinders until Spyro helps them. 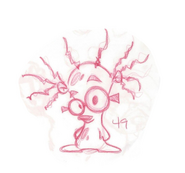 Brainy, Zapp and Watt having fun shocking a Gear Grinder
Add a photo to this gallery

Electrolls will occasionally take on a fearful stance during their idle animations.

A Gear Grinder along with an Electroll seen underwater in Magic Crafters.
Add a photo to this gallery

Retrieved from "https://spyro.fandom.com/wiki/Electrolls?oldid=117878"
Community content is available under CC-BY-SA unless otherwise noted.