“Look at this Dark Gem, it's pulsating with evilness. Still it would look nice on an engagement ring, don't you think, Spyro?”
—Ember

Ember is a young pink dragon who first appeared in Spyro: A Hero's Tail, at the time of Red's attack on the Dragon Realms. She is notable to have had a crush on Spyro in her debut, before falling in love with Bandit the Armadillo in Spyro: Shadow Legacy.

Based on her trading card design from Spyro Orange: The Cortex Conspiracy, Ember was originally a light orange dragon with a slightly different design. While developing Spyro: A Hero's Tail, Vivendi requested Eurocom to give her a 'generic girl' feel for use in cutscenes. So Ember's design was modified and she was given a pink color scheme complete with a heart locket around her neck and a heart-shaped tail spike to go along with the generic 'girl' vibe.[1]

Ember as seen in the early demo of Spyro: A Hero's Tail[2]
Add a photo to this gallery

In Spyro: A Hero’s Tail, Ember’s colors were changed to a pink color scheme, with her wearing a gold, heart-shapes necklace that bears a red gem in the center. She has light pink wings, large blue eyes, and a heart-shaped spade at the tip of her tail. She has a purple crest on her head and horns that slightly resemble Spyro's.

Not much is known about Ember or her past, but what is known is that she has taken a romantic interest in Spyro, and even suggests using a Dark Gem for an engagement ring (she also asked if it was possible to smash the gem into heart-shaped pieces). She wouldn't stop bothering Spyro until he and Ember were married. She later fell in love with Bandit the Armadillo in Shadow Legacy.

Spyro encountered Ember during the attack on the Dragon Realms by the former Dragon Elder Red, where she initially showed interest in the purple hero. She noted that the Dark Gem next to her was filled with evilness, but suggested it would look nice on an engagement ring before eagerly telling Spyro to destroy the Dark Gem, and remarked that she'll know he'll do it because he liked her.

After the Dark Gem was destroyed, and the bridge connected to the passage to Crocovile Swamp was restored, Ember told Spyro to not take the bridge to the Swamp, fearing that she wouldn't see him again. She isn't seen again afterwards for the remainder of the game, but her character model can be unlocked for viewing as well as gameplay.

Ember appeared as one of the captive residents in the Dragon Village when the Shadow Realm struck. She still showed interest in Spyro, until Bandit the Armadillo laid eyes on her, instantly falling in love. Spyro did a favor for a love-stricken Bandit by delivering Ember a love letter, and in turn, she fell in love with Bandit. She mentioned about going to Cliff Town to see Bandit herself, but knew she will get in trouble if she went there.

When Ember first made her appearance in the series, she displays a fanatical crush on Spyro; even so much that she believes they are destined to be married. She doesn't realize that Spyro only likes her as a friend, and is put off by her doting behavior. Ember even worries about Spyro's safety when he was about to go to Crocovile Swamp, and doesn't want to lose him.

After being saved by Spyro from the Shadow Realm, Ember encounters Bandit the Armadillo, who arrived to the Dragon Village to give the dragons a peace offering on behalf of the Armadillos to prove that they were harmless. At the time, Ember becomes unaware that Bandit had fallen in love with her at first sight. When Spyro gives her Bandit's love letter, the pink dragon is surprised and asks Spyro, "Can you tell Bandit...Yes..?"

Afterwards, Ember mentions that Bandit 'is so dreamy' and squeals at the thought of him, but knows she will get in trouble if she visits Cliff Town to see Bandit. It is evident that she has now fallen in love with Bandit, and no longer has a crush on Spyro.

Ember as a trading card in Spyro: A Cortex Conspiracy which shows her original orange colors 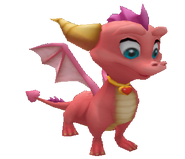 Ember's dialogue icon from Spyro: Shadow Legacy
Add a photo to this gallery

Retrieved from "https://spyro.fandom.com/wiki/Ember?oldid=125312"
Community content is available under CC-BY-SA unless otherwise noted.