According to a Story Scroll, stories are still built around the greatest catapult ever built: The Leveler, which has defended the warm valley of Vindlevale for centuries. Without the Leveler, there is little chance that Vindlevale could defend itself against the cold loving armies of the Ice Ogres and Snowclops that dwell nearby.

Haldor, the Great Northern Wizard, sought the Skylander to help him save his village of Vindlevale from the Ice Ogres, who have turned the village into an icy wasteland by blocking out the sun using a giant wall they built. Once at Vindlevale, Haldor explained to the Skylander about the Ice Ogres ruling over his village and turning it into a frozen wasteland. He tasked the Skylander to collect parts to The Leveler, a catapult that will be used to destroy the giant wall that keeps the village in eternal winter. Once The Leveler has been assembled, the Skylander used the catapult to destroy the giant wall, saving Vindlevale from the endless winter and returning the warm sun to the area.

Undead Skylanders are stronger in this area.

Undead Skylanders are stronger in this area.

Water Skylanders are stronger in this zone.

Water Skylanders are stronger in this area.

Undead Skylanders are stronger in this zone.

A round arena with the ever present hazard of the large rotating blade of the center of the field.

When used in the Ruins, the cave grants acces to the Empire of Ice chapter.

When used during a chapter, it will make icicles descend and then deal 999 damage to all enemies on screen with one use per chapter.

"A rain of anvils to batter your foes."
The use of this item causes anvils to rain from the sky for a limited amount of time.

"Whirling metal shields give you some protection from damage."
Using this item will temporarily increase the Skylander's armor of your Skylander.

When used in the Sanctuary, the gate that leads to the Empire of Ice is opened.

The use of this item is unknown at this time.

The use of this item is unknown at this time.

The packaging of Empire of ice 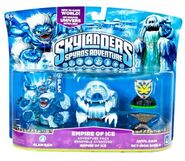 Retrieved from "https://spyro.fandom.com/wiki/Empire_of_Ice?oldid=125451"
Community content is available under CC-BY-SA unless otherwise noted.