“Clear your mind Spyro, and feel the fire that flows through your veins. Allow its heat to consume you, and breathe with it. Now, rise up and release the firestorm within you!”
—The Chronicler

Fire is one of the four main elements used by Spyro in The Legend of Spyro series. Unlike the fire ability in the Classic series, this breath attack was re-imagined to allow primary and secondary elemental abilities.Ignitus is an elder dragon who is the Guardian of Fire.

Fire is a form of light, heat, comfort, and even destruction; a primal force of nature. In the darker places of The Legend of Spyro, the Fire element burned its brightest, and this was true for all the elemental effects. It is governed by focused control over breathing and expressed by exhalation. While this ability is active, a Fire Dragon's horns, tail and wings would trail tendrils of gleaming sheaths of flame as they moved through an assault for more devastating attacks.[1]

Due to fear of his brother Sparx in danger and being killed, Spyro obtained his first use of the Fire Element. With lack of experience, Spyro would simply breathe flames (much like his past uses). Until training with Ignitus, Spyro learned how to shoot 'Fire Bombs', which were extending the flame breath in a small, concentrated form that would explode once it hit enemies. Using an extreme amount of energy, Fire fury would lift Spyro up until being enveloped by a line of red/orange energy until it was exploded into a larger 'bomb'. Unlike most elements, the Fire abilities would shoot or rain explosive, magma spheres once upgraded.

By re-awakening his dormant Fire element through his dream, Spyro kept his signiture flame breath but now as his new training by the Chronicler emerged, he would execute new abilities and forms of "fury". His secondary attack was Comet Dash, where he would spin around to home into his enemies like a missile while covered in pure, fire energy. His new Fire fury was similar to his previous one, but instead of the embers falling, Spyro has them circling around him until they fling up and aim at enemies like comets. Against certain enemies and especially bosses, Spyro instead spits out a flame that functions like a missile which could be charged indefinately.

Even though his fury was stripped permanently, Spyro's past Fire breath and Comet Dash can now both be upgraded a few times until fullest potential. This makes it the first reawakened element with lack of strength and versatility, unlike the others he had. 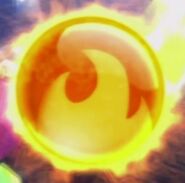 The symbol of Fire in Dawn of the Dragon. 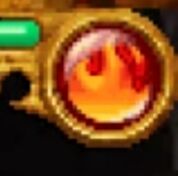 The DotD symbol in the DS version.
Add a photo to this gallery

Retrieved from "https://spyro.fandom.com/wiki/Fire_(The_Legend_of_Spyro)?oldid=124999"
Community content is available under CC-BY-SA unless otherwise noted.