The Legend of Spyro: The Eternal Night (brief glimpse)

“All gifts come with a price.”
—Flash

Flash is a blue dragonfly in The Legend of Spyro series who is Spyro's adoptive father and Sparx's biological father. He and his wife Nina were the ones who found Spyro's egg in the Silver River of the Swamp and adopted him into their family.

Flash and Nina both discovered Spyro's egg when it came to rest in the Swamp and gathered around the egg, wondering what kind of creature could be inside. Shortly afterwards, Spyro hatched from that very egg, and although Flash and Nina were frightened at first, they were amazed and astonished by the baby dragon. Knowing the swamp to be a very dangerous place[1], they eventually adopted Spyro into their family, and raised him as one of their own alongside their son, Sparx, who was born on the same day as Spyro.

Twelve years later, after Spyro and Sparx escaped from their encounter with Apes, they told Flash and Nina about the encounter and Spyro's sudden fire breath, and the two dragonflies were prompted to explain to Spyro the truth about what he really is and where he came from. Flash and Nina later followed after Spyro in time to see him off when he decided to find out where he came from, with Flash encouraging Spyro to keep his head up and use his newfound Fire breath wisely as all gifts come with a price.

Flash and Nina made a cameo in one of the pages of Spyro's book that was written by the Chronicler, happily watching a young Sparx. 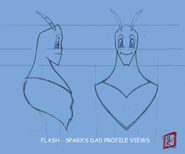 Flash and Nina as seen in the introduction cutscene to The Legend of Spyro: A New Beginning

Retrieved from "https://spyro.fandom.com/wiki/Flash?oldid=119358"
Community content is available under CC-BY-SA unless otherwise noted.