The Legend of Spyro: Dawn of the Dragon
The Floating Islands are a collection of hovering islands that are levitated by a powerful updraft that comes from the massive volcano below. It is composed of many architecture from Warfang[1] that was uprooted by Malefor, who suspended them and the city temple above the land through his dark magic. The Floating Islands serve as the entrance to Malefor's Lair.

In The Legend of Spyro: Dawn of the Dragon, it is the second to last location where Spyro and Cynder must make their way through.  They would need to open the main gate by lighting torches that are placed around the islands. They will also have to fight a troll and a couple more enemies until they finally reach a wind tunnel that will carry them up to the final battle in Malefor's Lair.

Upon arriving at the Floating Islands, Cynder was enchanted at how beautiful it was. Spyro, unfazed, noticed the tower that laid before them and pointed out that the tower lead to Malefor's Lair, only to earn a response from Cynder who thanked him for ruining the peaceful moment. The two dragons proceeded to light the torches around the islands, battle several last enemies, before finally flying towards Malefor's Lair for the final battle to save the world. 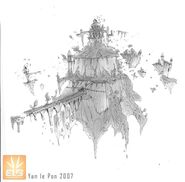 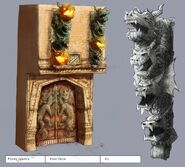 Concept art of the Floating Islands

Retrieved from "https://spyro.fandom.com/wiki/Floating_Islands?oldid=120567"
Community content is available under CC-BY-SA unless otherwise noted.