“Watch the dragonfly, Spyro, his colour indicates his power. When he eats butterflies, he stays strong. Like me.”
—Gavin

Gavin (ガビン=グリマーチョ Gabin in Japanese) is a blue dragon from the Artisans Homeworld, located in Stone Hill near the locked treasure chest.

In the Spyro Reignited Trilogy, Gavin is portrayed as a barista.[1] He appears shorter (given that he can stand up straight as opposed to down on all four), and he has a large bum bag attached by belt suspenders, carries a can of coffee and a cup to drink off. He also has a little blue mustache and his right biceps covered in tattoos. He has plugs on his horns and a bull ring on his nose.

In Reignited, Gavin appears in Stone Hill sleeping from exhaustion after celebrating the Year of the Dragon. He wakes up due to Hunter's wail of pain and witnessed Bianca stealing the last dragon egg. After the baby dragons are returned, he stands in the back next to Bubba watching the spectacle. 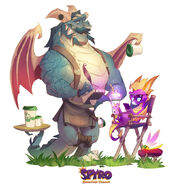 Retrieved from "https://spyro.fandom.com/wiki/Gavin?oldid=112783"
Community content is available under CC-BY-SA unless otherwise noted.