Gem Thieves[1], also known as Thieving Gnorcs, can only be found in the Artisans Homeworld in Spyro the Dragon. These Gnorcs cannot harm you, so they run away from you. They take three hits. The first two times they lose one red Gem, but when they die, they drop three red gems at once. After the first time they get defeated they will not drop gems but life. They can be both charged and flamed to beat them.

The Gem Thieves will always run on a set path, so if you can work out this path, they can easily be tracked down and caught. 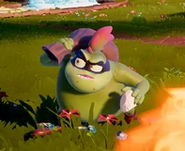 Retrieved from "https://spyro.fandom.com/wiki/Gem_Thieves?oldid=115174"
Community content is available under CC-BY-SA unless otherwise noted.