Goats are enemies that are appeared in Spyro 2: Ripto's Rage!, Spyro: Year of the Dragon, Spyro: A Hero's Tail, and Spyro: Shadow Legacy. They will charge at anyone who come within their line of sight. They can be defeated either by flaming or charging on them. They are not to be confused with Rams, a similar enemy found at the Cloud Temples.

Like rams, goats tend to charge at their enemies. As shown in A Hero's Tail, they also seem to obey their masters, when some goats were shown running towards Spyro after a Shepherd commanded them to. Other than that, they only seem to "baa."

Prior to Spyro's visit, three monks were working together to feed a Yeti one of the goats. One of the monks used his levitating spell on the goat, pulling it up to the two monks on top of the cliff. They then pulled the goat towards the tomb of the hungry Yeti, who was roaring loudly. The camera then faces one of the monks while we hear sounds of the Yeti eating something. However, the Yeti was eating the other monk instead of the goat, as it is revealed when the camera pulls back. The lucky goat is then shown looking at the monk, does a "baa," then looks at the camera before it blacks out.

While no goats have been confirmed to be enemies, Mountain Goats can be found as allies in Sheila's Alp. To get the eggs in that realm, take the three goats (Billy, Pete and Bobby) back to their homes. Each one will give Sheila the Kangaroo an egg. Near the end of the game, Billy got his head stuck in a wall near Bobby's house. It was unknown how he got his head stuck in, though he might have been chasing Bobby after being teased and rammed into the wall.

A goat, along with one of the Monk Colosi 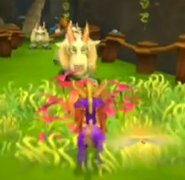 A goat in Spyro: A Hero's Tail.
Add a photo to this gallery
Retrieved from "https://spyro.fandom.com/wiki/Goats?oldid=120346"
Community content is available under CC-BY-SA unless otherwise noted.