The Green Colosi are inhabitants of Idol Springs, a realm in Avalar. They resemble the Monk Colosi from Colossus, but are green and wear different clothes. The females are known to be hula girls, while the males are the workers that created the Idols (along with one Hula Girl Idol). The workers wear two different types of outfits, though only the foremen speak with Spyro.

The worker Green Colosi were carving wooden idols when the idols themselves suddenly came to life and began terrorizing the residents. The Colosi were then locked out their temples and had their food stolen by the rogue idols until Spyro arrived into their realm and fended off the idols. With the idols calmed, they began co-existing with the Green Colosi, starting with one idol began roasting its hot dog with the other Colosi workers by a river. 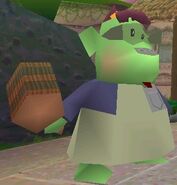 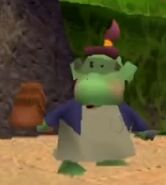 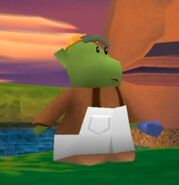 Hulagirl Stella
Add a photo to this gallery

Spyro Reignited Trilogy concept art of the Green Colosi, Monk Colosi, and Hulagirls by Oleg Yurkov
Add a photo to this gallery
Retrieved from "https://spyro.fandom.com/wiki/Green_Colosi?oldid=122618"
Community content is available under CC-BY-SA unless otherwise noted.