Twincaster (only with Handel)
Martial Arts

“Have you seen my sister Greta? She's ugly with pigtails...”
—Handel

Greta is one of the two child secret agents, debuting in Spyro 2: Ripto's Rage!, first seen along with her twin brother, Handel, in the desert world, Scorch. She later appeared in Spyro: Year of the Dragon, at the Fireworks Factory.

Greta is obviously the brains of the duo, although she has trouble pronouncing Ls and Rs, unlike her brother (in Spyro 2; in Spyro 3, he has trouble with it too). She appears to have a sibling rivalry with Handel, as several dialogue snippets in Scorch have the two insulting each other.

Greta is seen displaying amazing feats of physical ability, including the ability to defeat many enemies just like Spyro. She has also been seen making enormous leaps, and appears to be adept in martial arts, as seen in Fireworks Factory. Her most unusual ability is to perform a powerful spell with Handel. The spell is powerful enough to kick several enemies out of the castle in Scorch.

Greta's assignment, along with Handel's, was to blow up the enemy castle in Scorch and acquire the flag as proof their mission was completed. The reason why this mission was delayed is because Handel fell for a trap which used a lollipop as bait and Greta had to temporarily continue on without him. Spyro had to help the twins in order to receive the Talisman, which was the Emerald Scarab, that Greta stole from one of the guards. After Spyro exited Scorch with the Talisman in hand, the scene is shown where Greta and Handel were surrounded by the castle guards. The two held each other's hands, and when their hands connected, their eyes turned piercing red, and they held orbs of yellow light in their hands. Then, they threw them at the guards, knocking them out.

It was revealed in the epilogue of the original game that Agent Zero took Handel and Greta under his wing as his new recruits.

Greta was seen again at the Fireworks Factory, in which she had to steal back the Professor's rocket plans from the Sorceress. After Spyro helped her launch the rocket, Greta gave him a dragon egg that was attached to it before asking him to tell Handel that she's helping building a rocket. Greta headed back to Evening Lake, where she, along with Bentley, Princess Ami, Crazy Ed and Eugene, helped prepare the rocket that would take Spyro and Sparx to Midnight Mountain (and Scorch's Pit).

Greta in Spyro: Year of the Dragon
Add a photo to this gallery 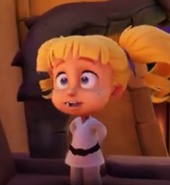 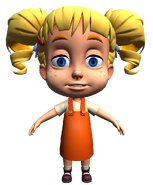 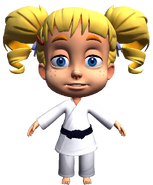 Retrieved from "https://spyro.fandom.com/wiki/Greta?oldid=124023"
Community content is available under CC-BY-SA unless otherwise noted.