Mace swipe
Shield attack
Hero Orcs are one of the strongest type of Orcs in The Legend of Spyro: Dawn of the Dragon. Their rank is that of the Ape Commanders from Spyro's previous two adventures.

According to Grublin general rank and file units, Grublins that have survived enough battles earn the rank of "Hero", which supposedly grant them an increase in size and/or strength.[1]

A Hero Orc was the leader of a group of Grublins that discovered Spyro and Cynder within the time crystal in the Well of Souls ruins and freed them from their three-year sleep. After shackling them together with the green snake necklaces, the Hero Orc and the Grublins dragged the two unconscious dragons away to the Catacombs to be sacrificed to the Golem. It appeared again near the platform Spyro and Cynder were chained to, noticing that the two dragons have awakened too soon before the Golem arrived, and commanded the lesser Grublins to stop them before they could escape.

At the Dam, a Hero Orc (supposedly the same one from before) engaged both Spyro and Cynder in battle while flanked by two Orc Archers to stop them from destroying the dam. Before their fight, the Hero Orc urged the two dragons to surrender to grant them a quick death. In the end, it was ultimately defeated.

Other Hero Orcs are later battled through the rest of the game.

Hero Orcs are one of the game's toughest enemies, maybe even the longest to defeat. Their shields need to be destroyed and their spiked clubs have to be disarmed in order to attack them at full power. The swinging blows from their clubs are devastating, and they need to be disarmed from their weapons in order for them to be temporarily defenseless.

Cynder's primary wind breath and Spyro's primary electrcity breath are both just as effective against Hero Orc's as each other as both attacks leave them dissarmed. However Cynder's wind breath only slows down the Hero Orcs where as Spyro's electricity breath leaves the enemy stunned for as long as the player is attacking the enemy. 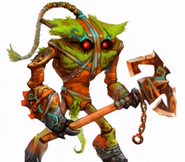 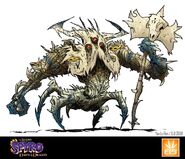 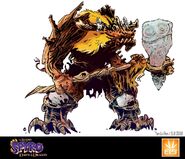 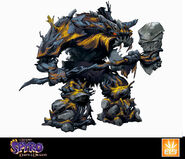 Retrieved from "https://spyro.fandom.com/wiki/Hero_Orcs?oldid=122985"
Community content is available under CC-BY-SA unless otherwise noted.