In Spyro: Year of the Dragon, most of the hummingbirds have purple feathers, with light blue bellies and eyebrows, yellow talons and beak, purple eyes, and green tail feathers. They are all female and speak with French accents. The only different hummingbird is Cpl. Gabrielle who has light blue feathers, a blue tail feather and eyebrows, a pink belly, yellow talons and beak, and purple eyes and tail feathers. The Hummingbirds of the Base also possess French accents.

The hummingbirds change drastically in Spyro: Season of Ice. They're all red with long pointy beaks, they all have green eyes (even though their render shows that they have red eyes), and they're all a lot smaller, with also smaller wings.

In this game, Spyro needs to rescue six Rhynoc captured hummingbirds. They are all very military oriented.

The Hummingbird icon from Spyro: Season of Ice.

A Hummingbird from Spyro: Season of Ice.

The Hummingbird icon from Spyro: Year of the Dragon.

A different colored Hummingbird from Sgt. Byrd's Base.
Add a photo to this gallery 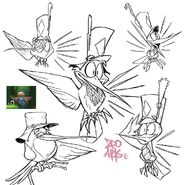 Year of the Dragon

Retrieved from "https://spyro.fandom.com/wiki/Hummingbirds?oldid=120897"
Community content is available under CC-BY-SA unless otherwise noted.