Hunter (The Legend of Spyro)

“It has begun...”
—Hunter of Avalar, The Legend of Spyro: Dawn of the Dragon

Hunter, also known as Hunter of Avalar, is a skilled Cheetah warrior in The Legend of Spyro series. He is a member of the cheetah clan who reside in the Valley of Avalar.

When Yan Le Pon designed Hunter of Avalar for The Legend of Spyro: Dawn of the Dragon, he referenced Hunter the Cheetah from Spyro: A Hero's Tail, and his attire is based on Robin Hood and Roman legionnaire.[1] His bulky design would later be refined to give him a slimmer build that would be fit for an archer. Yan Le Pon's finalized sketch of Hunter would later be revised by fellow colleague Veronique Meignaud. 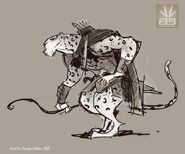 The rough draft of Hunter of Avalar by Yan Le Pon

In his original Krome Studios design, we were only given a back view of Hunter's appearance. He resembles his original Spyro counterpart in spots, and has three-fingered hands. He carries a bow in his right hand, and a quiver on his back filled with arrows over top of his cloak. While his left arm is bare, the entirety of Hunter's right arm is seemingly covered in metallic material.

In his redesign by Étranges Libellules in The Legend of Spyro: Dawn of the Dragon, Hunter's spots were changed to ringlets with stripes on his forehead and has more pointed ears. He has short red sleeves on his elbows and the lower part of his arms; he wears a hooded coat with a reddish cape pinned to it by a badge bearing a triple yin-yang symbol. Unlike his previous character design by Krome Studios, Hunter has four fingers.

Unlike the other members of his normally reclusive clan, Hunter is a different soul.[2] He chose to help fight alongside the Dragons in the battle against Malefor and his army instead of staying neutral. The cheetah warrior is also fascinated by the Dragons, who are notable for their ability to restore their strength from the Spirit Gems. Additionally, in comparison to his counterpart from the original series, Hunter is far more mature, serious and intelligent, possessing something of a no-nonsense demeanor.

While leading Spyro and Cynder to safety, Hunter is shown to be extremely agile, leaping across large gaps and scaling up steep cliffs. Much like his original Spyro counterpart, he is a skilled archer, and by using this skill, he aids Spyro and Cynder during their battle against the Grublins, usually firing his arrows from a safe distance. Hunter also has pet falcons that he uses to send messages to inhabitants who live in great distances.

Hunter was first mentioned when Spyro was on board Skabb's flying arena ship, the Fellmuth Arena. Like Spyro, the cheetah warrior had been captured and forced to fight in the Arena. During his imprisonment, Hunter sent a letter to the young dragon, delivered by Mole-Yair, warning him of the dark times ahead and reassuring Spyro that he has allies. It is presumed that Hunter escaped when the Arena came under attack by Gaul's aerial forces.

Hunter wasn't mentioned again and didn't make an appearance until the last scene of the game after the credits. The Chronicler was speaking to Spyro, who was trapped in the time crystal with Cynder and Sparx within the remains of the Mountain of Malefor. As the camera pans out, Hunter was revealed to be watching over the crystal.

Between The Eternal Night and Dawn of the Dragon

After the Night of Eternal Darkness, Hunter was sent by Ignitus to find Spyro and Cynder when they didn't return to the Dragon Temple. His search for them would last three years, all the while the cheetah warrior witnessed Malefor's reign over the world when the dark dragon was revived.

The following covers Étranges Libellules's take on the storyline, which starts out slightly different with the Grublins finding Spyro, Cynder and Sparx instead of Hunter (who was previously seen in the post-credits scene of The Eternal Night discovering the time crystal).

As three years passed, Hunter secretly followed a group of Grublins through the ruins of the Mountain of Malefor where they lead him to where Spyro and Cynder were encased in crystal. After the Grublins freed Spyro and Cynder from their crystal prison, and dragged them away to The Catacombs, Hunter emerged from the shadows and checked on Sparx, who was left behind and stirring awake.

The cheetah warrior successfully found Spyro and Cynder within the catacombs, and after saving them from the Golem, informed the two dragons that he was sent by Ignitus to find them three years ago. Realizing the danger in staying in the catacombs, Hunter escorted them to Twilight Falls in order to make their way to the dragon city of Warfang. On their first night in the Enchanted Forest, Hunter sent out a falcon to tell Ignitus and the other Guardians the news that he has found Spyro, Cynder, and Sparx. Afterwards, Hunter explained to Spyro and Cynder about the dark times that was currently happening since Malefor returned shortly after they disappeared at the Well of Souls. However, before Hunter could explain further, they were all rendered unconscious by hidden attackers, and awakened to find themselves held captive in the Cheetah Village by the village leader, Chief Prowlus.

Hunter was scolded for bringing Dragons and dangers into the Valley of Avalar, but Hunter defended his actions and reminded Chief Prowlus that Spyro was their only hope in defeating Malefor and that the dangers were already around them. When the village came under attack by Grublins, Chief Prowlus reluctantly released Spyro and Cynder to help fight them off but refused to released Hunter. He wasn't allowed free until Spyro and Cynder recovered a missing member of the village, Meadow, and Chief Prowlus apologized to Hunter for his actions. Prowlus offered Hunter the use of the forbidden passageway to reach Warfang, and in return, Hunter offered an invitation to Chief Prowlus that he was welcome to join them at any time.

Upon arrival at Warfang, Hunter and the dragons discovered that the city was under siege by Malefor's army and when they set out to find Ignitus, Hunter was separated from Spyro and Cynder. He waited in the courtyard by the city gates whilst the rest of the cheetah villagers arrived to attack the army from outside the city walls. Hunter was then attacked by a Troll that managed to break through the city gate. When Spyro and Cynder finally met back up with Hunter, they killed the Troll and watched as Malefor's army retreated.

However, their victory was short lived when the Golem from the Catacombs returned and began attacking the city. Hunter instructed Spyro and Cynder to take cover and headed out to help destroy the Golem. It's unknown what exactly he does to accomplish that, but when Spyro and Cynder finally destroyed the Golem, Hunter was present to hear Malefor's plan and witnessed the resurrection of The Destroyer. Hunter and the rest of the cheetah warriors accompanied the Dragons through the underground passages to stop the Destroyer, and when that failed, he helped by sending his falcons to the outer regions to spread the message of telling the inhabitants there to move underground where they would be safe.

After the world was reconstructed by Spyro's power, Hunter was last seen emerging from the underground city with the other inhabitants and was amazed by the sights around him. Along with the Guardians, the cheetah warrior looked to the skies to watch a group of stars form a constellation of a Dragon, signalling the beginning of a new age for the Realms.

Hunter possesses a lot of faith in Spyro, who he strongly believes is the last hope in stopping Malefor for good.

Although he is aware of Cynder's past as Malefor's servant, Hunter fully trusts her since Ignitus has faith in her as well.

It was Ignitus who sent Hunter to find Spyro, Cynder and Sparx when they disappeared three years after the Night of Eternal Darkness occured. The cheetah warrior considers the Guardian dragon a valuable ally, and will trust anyone if Igntius himself trusts them. He seems to be Ignitus's lieutenant of sorts, often carrying out the old dragon's commands and acting as a scout and tracker. He respects Ignitus's wisdom, status as a dragon, and his unwavering resolve.

Hunter's alliance with the Dragons puts him in conflict with his clan chief Prowlus, who strongly distrusts the Dragon race because of Malefor and Cynder when she was under the latter's control. Both Hunter and Prowlus share some sort of rivalry, with Hunter being aware that the danger was already around them while Prowlus accused Hunter of abandoning the Cheetah Village and bringing the dangers back with him. When Spyro and Cynder recovered Meadow after he went missing, Prowlus realized his error and apologized to Hunter for his actions. It is unknown if both Hunter and Prowlus resolved their differences after the events of Dawn of the Dragon.