These arrows are items that belong to Hunter the Cheetah. He uses them to shoot targets.

At some point, Hunter decided to go on a hunt for Earthshapers in the world of Fracture Hills but due to the works of the Alchemist, who promised him he could turn his boots to gold, he got stuck in cement. After being freed, he asked Spyro to help him by headbashing them once he has shot them with his arrows. After helping him, Hunter awards Spyro with an Orb.

Hunter later used his arrows to help Spyro continue his quest to free the Dragon Realms of Red the Dragon's evil plans.

When the Calamity struck, and all the worlds became infected with the Shadow Realm, all the cheetahs in the Savannah were captured in the realm by Shadow Minions. After Spyro freed them all, the cheetah Kasi blamed Spyro because he was a purple dragon, as purple dragons are the most magical, and threw him in jail, as well as Hunter for siding with him. Later on, Hunter asked Spyro to get Neema to distract Kasi, and she asked for one of Hunter's arrows as confirmation that the young dragon was telling the truth.

Hunter shoots an arrow at a target dartboard 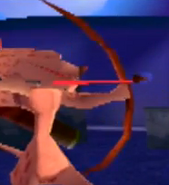 Retrieved from "https://spyro.fandom.com/wiki/Hunter_the_Cheetah%27s_arrows?oldid=118427"
Community content is available under CC-BY-SA unless otherwise noted.