“The power of ice also moves through you, just as the chilled winds whip through your wings. Let it... expand!”
—The Chronicler

Ice is also one of the main elements Spyro uses in the Legend of Spyro series. The element of Ice is good for trapping enemies so you can melee them, and it works well with Spyro's Dragon Time ability.Cyril is the Ice Dragon Guardian.

Ice is a weapon of great contrasts and a tool of many uses. For the mightiest of Ice Dragons, it can slow the approach of an approaching army, or provide drinking water to a thirsty village. To harness the abilities of Ice, a Dragon must first learn to understand the nature of water and embrace a steely resolve deep within themselves, for only then can a frozen solid be produced. Moisture is drawn in from the air and (in dire emergencies) from the Dragon's own body. In combat, it is plausible that a master of Ice could suppliment their defenses by magically sheathing parts of their body in magically projected pack ice, or when on the offensive, adorn themselves with impressive protrusions of needle sharp ice. It is the tool of the true survivalist.[1]

Ice Dragons are more aloof and elitest when dealing with their more affable and flexible 'cousins', the Water Dragons.[2]

In an unusual situation, Spyro and Sparx came towards a pathway in Tall Plains, where they noticed Kane fall from a waterfall during an encounter with Rubble Brutes. Seeing Kane in mortal danger, Spyro's ice abilities were awakened, allowing him blow out a stream of ice to make a large, glacier formation on the river to prevent Kane from falling to his death.[3] Sparx was dumfounded by his abilities and Spyro agreed with it too. However, when utilizing this new trait known as Ice Stream, Spyro took it until he learned how to manipulate his Ice Element by Cyril. He later would shoot ice spikes to slow down or take out his foes faster. He learned his Ice Fury, where he at first would create a large swirling area of mist and at its second form, erupt many enormous ice spikes up high until they fall and freeze enemies, or just kill them. The fury would explode once its energy was used up.

Like other elements, Spyro re-obtained his ice element via his Ice Dream. With learning to understand how he could re-use it, he learned more potent abilities. With his Polar Bomb, Spyro would inhale pure, white ice energies to spit out a ball of snow which would freeze liquids to make temporary ice-made plaforms, he could use it to freeze enemies and burnt surroundings like before. With Splintering Bomb and Piercing Bomb, the icy sphere would hurt enemies with misty shrapnel. By manipulating ice, Spyro would mimic his past situation with Ice King (using "his" attacks as an example for his inspiration this time) and create an Ice Tail attack which makes the reminincing ice blade to swirl around him and take out large bits of health. By using fury energy, Spyro levitates and surrounds himself in a huge sphere of ice covered with many icicle blades he used normally, which he gets some swirls of dim blue mist around at the ground. Once he charges enough of an orbit, Spyro commands the sphere and 'ice blades' to explode outwards, taking out all enemies.

Once Spyro had all his elements awakened, he could utilize his past ice spikes but now he could execute Snow Storm where he spins in a icy vortex. His Snow Storm could shoot out ice spikes in every angle while using the twister attack, similar to the previous Ice Fury and he could improve his speed with it. However, during a battle with Malefor by using any magic-exclusive attack on him, Spyro's Ice abilities will create a wide frost cloud for a short period of time. 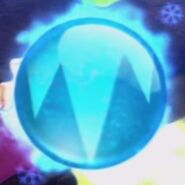 The symbol of Ice in Dawn of the Dragon. 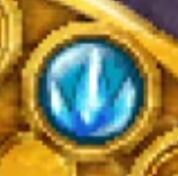 Retrieved from "https://spyro.fandom.com/wiki/Ice_(The_Legend_of_Spyro)?oldid=125001"
Community content is available under CC-BY-SA unless otherwise noted.