Marcelo Tubert (1999)
The Icebuilders are natives to Crystal Glacier, a realm in Autumn Plains. They are related to the Bonebuilders of Skelos Badlands. Like their cousins, they are led by a Shaman elder.

The Icebuilders sought Spyro's help in rescuing their leader Shaman Tok from the Ice Wizards who imprisoned him. This was urgent to them since the Shaman had tonight's tickets to the hockey game in Colossus. The Icebuilders helped Spyro make his way towards the Ice Wizards' stronghold, and when the dragon thawed out the last bunch, they constructed a giant snowball to roll towards Shaman Tok's prison and break it open. In the epilogue, it was revealed that the Icebuilders made it to the big hockey game in Colossus. 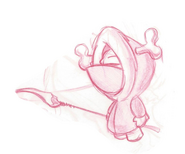 Retrieved from "https://spyro.fandom.com/wiki/Icebuilders?oldid=121339"
Community content is available under CC-BY-SA unless otherwise noted.