“Any advice before this battle?”
—Spyro

“Advice, hmmm... A wise dragon once told me. 'Aim high in life but watch out for flying boxes.'”
—Revilo

Jacques ( アメージング・ボックス, Amazing Box in Japanese) is a jack-in-the-box/fool hybrid who served as the penultimate boss in the original, Spyro the Dragon game. He resided in Dream Weavers, in a nightmarish volcanic landscape that was populated by lava creatures. Spyro confronted Jacques, and fought him on a series of platforms that levitated above a volcanic crater. The young dragon was able to best Jaques, and leave his realm.

Jacques mostly threw boxes at Spyro throughout the battle. As Spyro chased him, Jacques moved from one platform to the next until he reached and stood on a dark pink box, where he'd stay put and continue throwing boxes. If Spyro flamed him, he moved quickly to the next dark pink box (there were three in total) and repeated the same process. Once Jacques was flamed on the last pink box, he disappeared and left four Purple Gems worth twenty-five (each); just near the exit vortex. 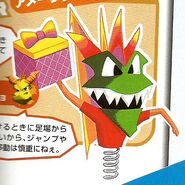 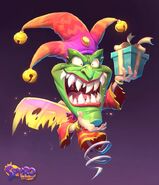 Jacques' colored model by GFactory
Add a photo to this gallery

Retrieved from "https://spyro.fandom.com/wiki/Jacques_(Boss)?oldid=124094"
Community content is available under CC-BY-SA unless otherwise noted.