Jacques (アメージング・ボックス 5-4 Amazing Box 5-4 in Japanese) is the Boss Realm for the Dream Weavers Homeworld. Jacques is the French name for "Jack," which is appropriate because Jacques is a large jack-in-the-box. The realm consists of a series of dark, floating castles surrounded by orange pools of lava and patches of grass-covered land. Many of the enemies sit on pedestals. Other pedestals must be temporarily raised by attacking the Fools in order to progress through the realm to Jacques.

Jacques is made up of multiple, volcanic, floating islands. The ground here is made up of rock with grass growing on the top of it. Some of the ground is elevated, making normal entrance impossible, so the only way up to these parts is by solving the tricky puzzles of the Clock Fools who cowardly run to escape. These will raise pedestals, but hurry up! These pedestals will retract back down if you're too slow! The other population of this realm are nightmarish monsters that are protecting the realm with all they've got. Hidden in the mountains is a secret passage where a dragon named Unika was trapped. Here clock fools are once again are at their trickery, but this time they activate receding platforms, that leads to Gems. To the left are many pedestals holding Giant Pansies. In other areas of this nightmarish realm are Pansies and Horrors standing on small floating plots of land. Around this realm are castle pieces, with the main part of the structure being the entrance to Jacques's boss fight.

Jacques's boss arena is made up of a series of floating platforms that gradually get higher. Were you to fall from one of these platforms; you would hit the lava down below (This leads to a life lost)! The background of this realm is dark blue with orange, lava mountains in the skyline. 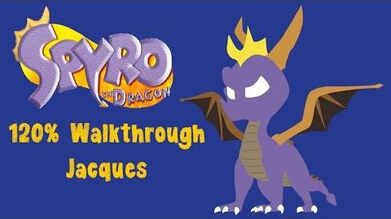 Retrieved from "https://spyro.fandom.com/wiki/Jacques_(Realm)?oldid=121280"
Community content is available under CC-BY-SA unless otherwise noted.