“Welcome to the Dream Weavers, young one. While chasing Gnasty's minions in this world, you must expect the unexpected and prepare for what is not there.”
—Lateef

Lateef (ラティ=ドリノマール Latee in Japanese) is a dragon who is the leader of the Dream Weaver dragons in Spyro the Dragon. After Spyro freed him in the Dream Weavers realm, Lateef welcomed the young dragon's arrival and gave him advice on dealing with Gnasty Gnorc's minions in the Dream Weavers world. Lateef later went to confront Gnasty Gnorc along with several other dragons, but was imprisoned a second time. He was released by Spyro again in Gnorc Cove.

In the Spyro Reignited Trilogy, Lateef is portrayed as a monk.[1] His skin is a deeper shade of blue and he has two pieces of some kind of red cloth around his neck and waist trimmed with gold, a gold necklace with tassles and a rope belt. He has ears, has feathered wings, balances on his tail, and has a small pot with pink rocks. He seems to be dealing with the mystical arts as he talks in riddles.

Lateef and his friend Revilo in Dark Hollow.

Lateef freed in Gnorc Cove
Add a photo to this gallery

A character roster with Lateef included by Rob Duenas 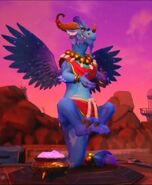 Lateef freed in Gnorc Cove
Add a photo to this gallery

Retrieved from "https://spyro.fandom.com/wiki/Lateef?oldid=117424"
Community content is available under CC-BY-SA unless otherwise noted.