“One Strike and You're Out!”
—Lightning Rod's official catchphrase

Lightning Rod (ライトニングロッド in Japanese) is a storm giant who is one of the playable Skylanders in the Skylanders series, first appearing in Skylanders: Spyro's Adventure.

Lightning Rod prides himself on being the most macho of all the other storm giants in Skylands,[1] though he isn't used to sharing the spotlight. He is brave, but can also be charming and charismatic. Lightning Rod even considers everyone else in Skylands to be 'girlie', especially girls, and few are brave enough to argue with him![2]

Lightning Rod once lived in the majestic Cloud Kingdom, where his countless acts of heroism along with his winning smile and electric physique made him the most famous storm giant in the realm. He was a true celebrity, and the palace halls were littered with statues of the chiselled hero. But all the praise and admiration could never quite satisfy Rod, who yearned for something more. As luck would have it, he met an adventurous young dragon named Spyro, who told him fantastic stories of faraway places and dangerous adventures. Rod was spellbound, and he set off with Spyro to seek an audience with Eon to join the Skylanders.

The storm giants are the ancient athletic heroes of Skylands who like to be number one in every event. Aside from being able to bench-press 250 tons, few things are important to the storm giants than their grand competitive games. And the celebrated champion of the storm giant sporting elite is Lightning Rod. Lighting Rod is the giants' most talented thrower, and sat atop of the table in the thousand-metre lightning bolt hurl for many a year (that was until he sent a stray bolt into the crowd, electrifying a spectating cyclops in the process).

But it was during a different event - the triple gold ring lightning bolt toss with a twist - that Rod hit the headlines. Just as he was flexing for the throw, Kaos' giant projected head appeared above the crowd, demanding - as usual - that all in attendance submit to his rule. Lightning Rod wasn't used to sharing the spotlight, so he hurled his bolt skyward. So powerful was the throw that it ripped past the project and into Kaos himself, who was hiding behind in an airship. Seething with anger and spitting blue sparks, Kaos had to accept defeat and flew away. But another attending Portal Master - Eon - had also seen the action, and immediately made Lightning Rod a Skylander.[3]

At the start of the Annual Storm Titan Games, Lightning Rod accidentally hurled a large hammer in the path of Flynn's balloon, causing it to spiral out of the control. The Skylanders quickly came to the rescue, knocking away the balloon's dangerous debris from the spectators within the stadium and saving Flynn, Double Trouble, Hugo and a Warrior Librarian named Squirmgrub who were on board the balloon from crashing. Hugo then told Master Eon that the Mask of Power had revealed the location of the next fragment to the Mask of Power, and that Squirmgrub has also discovered something about the malevolent item.

Within the stadium, the Skylanders discovered that the Air segment to the Mask of Power has seemingly taken on the form of a Land Whale, which was stationed at a zoo held by the Cyclops Queen at Tempest Towers. Master Eon sends Lightning Rod, Pop Fizz, Drobot, Double Trouble, Cali, and Flynn to the Tempest Towers that lied beyond the Sea of Storms in their mission to claim the Air fragment before Kaos made his move. However before they could depart, Kaos captured Cali, who knew the path to Tempest Towers. The Skylanders gave chase, following Kaos while treking through the Sea of Storms and battling Windbag Djinnis in the process. They managed to get to Tempest Towers and trick their way inside with Pop Fizz's beserker form posing as a never-before-seen creature, while Flynn and Double Trouble keep a lookout for Kaos.

However after tricking the Cyclops Queen and her husband, Pipsqueak, the Skylanders were found out, and Lightning Rod and Drobot were thrown to the tank where the immobile Land Whale resided. The Storm Giant became hypnotized by the Whale and began walking towards its open jaws, but Drobot quickly distracted the monster long enough for Lightning Rod to break of the Land Whale's hypnosis and free the robot dragon before he was eaten alive.

The two Skylanders escaped with Pop Fizz in time to see Kaos and his army of Drow battling against the Cyclops Queen's forces, with Kaos winning the struggle. Knowing that Kaos was after the Land Whale for the Air fragment, Lightning Rod hurled the Whale far from Tempest Towers, and the evil Portal Master hastily followed after it. The Skylanders were confused by Lighting Rod's action, but discovered that the Air fragment was really one of the towers of the city, which was made of Cyclopnite, the heaviest stone ever mined, and the opposite of the Air element.

Lightning Rod drank one of Pop Fizz's potions to grow to a humungous size big enough to carry the tower back to the Eternal Archive. After releasing the animals imprisoned by the Cyclops Queen back to their respectable homes, and retrieving the Air segment, Lightning Rod was returned to his original size, and surprisingly shared the glory of stopping Kaos with the other Skylanders. Unknown to the Skylanders, there was a traitor in their mist who had been revealing the locations of the Mask of Power to Kaos: Squirmgrub.

Being a storm giant, Lightning Rod can throw lightning bolts and summon a large lightning bolt to strike down from the heavens to vanquish his foes. He can also send out electrical discharges from his cloud base to electrocute surrounding enemies. 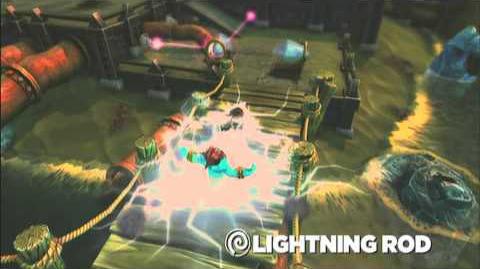 Skylanders Spyro's Adventure - Lightning Rod Preview (One Strike and You're Out) 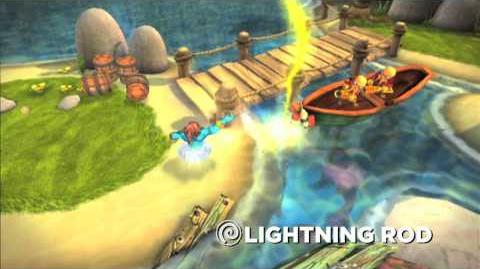 Skylanders Spyro's Adventure - Lightning Rod Trailer - One Strike and You're Out! 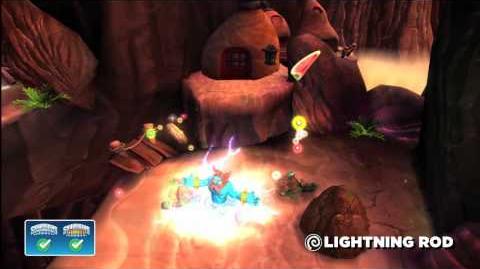 Retrieved from "https://spyro.fandom.com/wiki/Lightning_Rod?oldid=120033"
Community content is available under CC-BY-SA unless otherwise noted.