The Lions are the natives of Sunny Villa in Spyro: Year of the Dragon, and Roman City in Spyro: Season of Ice.

The male lions are brown, and wear a green leaf headdress, as they are meant to resemble Romans. They've green eyes and cream colored togas with a gold seal.

The female Lions, on the other hand, are pink and wear a pink flower headress. They've somewhat grey eyes, and white togas with, also, a gold seal.

The lions enjoy eating chickens. Male lions have German accents, while female lions have Spanish accents. The lions like to pet their tails, as shown in their idle animation.

Here the lions live in Roman City, where they seem to be having problems with the upcoming Fairy Festival. They're all very panicky, although they don't care for, or about the rhynocs there, aside from how they affect the Fairy Festival. 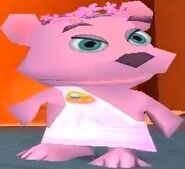 Rapunzel, the only female lion depicted in the game

The lion icon from Roman City

Retrieved from "https://spyro.fandom.com/wiki/Lions?oldid=112661"
Community content is available under CC-BY-SA unless otherwise noted.