“You've reached the highest point in Cliff Town. You can get to almost anywhere from here. If I were you, I'd use that whirlwind over there.”
—Marco

Marco (マルド=バトフーチョ Marudo in Japanese) is a Peace Keepers dragon who first appeared in Spyro the Dragon. He is found in Cliff Town.

In the Spyro Reignited Trilogy, Marco is rather slim, with light green fins behind his horns that continue in a fin from his back to tail. He wears a helmet visor, leather tassets on his hips, and notably has metallic prosthetic wings held by straps around his chest, and carries a halberd axe. He also has some armor patches on top of his neck, and a ring on his tail. 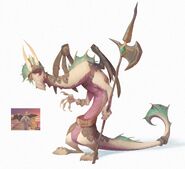 Retrieved from "https://spyro.fandom.com/wiki/Marco_(Spyro_the_Dragon)?oldid=123100"
Community content is available under CC-BY-SA unless otherwise noted.