“I hate those bugs! When I become big and strong, like you, I'll squash 'em all!”
—Spyro

“Until then, remember that super charge makes you invincible.”
—Ajax

Metalback Spiders (also known as Bugs) are large enemies that appeared in Spyro the Dragon and in the Reignited Trilogy remaster of the first game. They are found in High Caves and can only be defeated by using the Supercharge or Superflame power-ups.

When entering High Caves, avoid these spiders at all costs. Run away from them and jump onto any higher or lower ground you can find to get a break and see where to run next. Once you get either the Superflame or Supercharge power-up, they can be defeated just as easily as every other enemy. 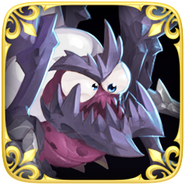 Retrieved from "https://spyro.fandom.com/wiki/Metalback_Spider?oldid=119999"
Community content is available under CC-BY-SA unless otherwise noted.