The Monk Colosi are Colosis that debuted in Spyro 2: Ripto's Rage!. They are monks that live in Colossus and have special powers including a form of telekinesis. They later reappeared in Spyro: Enter the Dragonfly in the Banzai Speedway as rickshaws.

Three Monk Colosi in Colossus were trying to feed a Goat to a Yeti, but instead, he ate one of the monks. With the yeti on the rampage, the scared monks shut all the doors to keep the beast trapped. Spyro eventually ventured his way through the monastery and confronted the yeti, only for the monster to cause his own demise instead.

The Monk Colosis had later taken jobs in Banzai Speedway as rickshaws and were seen running a set path.

Also shows how to get the skill point.

A Colosi and a Goat 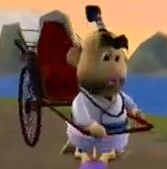 Colosi as seen in Spyro: Enter the Dragonfly
Add a photo to this gallery

Spyro Reignited Trilogy concept art of Monk Colosi, Green Colosi and a Hulagirl by Oleg Yurkov
Add a photo to this gallery

Retrieved from "https://spyro.fandom.com/wiki/Monk_Colosi?oldid=124430"
Community content is available under CC-BY-SA unless otherwise noted.