Cooking foes (according to what she said once)

Mrs. Shoutfire, also known as Nanny, is an elderly female dragon who first appeared in Spyro: A Hero's Tail. She is in charge of the nursery in the Dragon Village, which is a realm in the Dragon Kingdom.

Mrs. Shoutfire can get stressed and worried, as you can see when she asks Spyro to help her retrieve the dragon eggs. Also, she is quite aggressive because she says, "I'm too old and too slow to catch those thieves. But if I could, I would boil, poach, fry and scramble their little heads!" which also shows she is fairly protective.

Mrs. Shoutfire runs a small nursery in the Dragon Village and looked after the dragon eggs. Unfortunately she wasn't so good when faced with thieves who managed to steal them all. Luckily for her, though, Spyro was around and was quickly tasked with retrieving them all. Shoutfire explained that if he completed each set of eggs, there is a bonus in the unlockables page, including playing the Ember/Flame model. 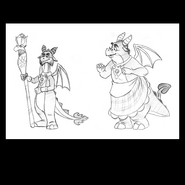 Concept art of Mrs. Shoutfire and Astor
Add a photo to this gallery

Retrieved from "https://spyro.fandom.com/wiki/Mrs._Shoutfire?oldid=125355"
Community content is available under CC-BY-SA unless otherwise noted.